BRENTWOOD –- Los Vaqueros Reservoir, a Contra Costa Water District reservoir that receives its water from the Delta, reopened on Saturday, September 26 to fishing after being closed on August because of a fire in the watershed.
Anglers can again pursue rainbow trout, striped bass, channel catfish, largemouth bass and other species at the popular recreation area, but fishing for catfish and striped bass offers fishermen the best chance of success at this time.
The reservoir, located near Brentwood 46 miles from Stockton via Highway 4, first opened to fishing in September 2001. I was one of the first anglers to ever fish the lake, along with Larry Ward, then the President of United Anglers of California, 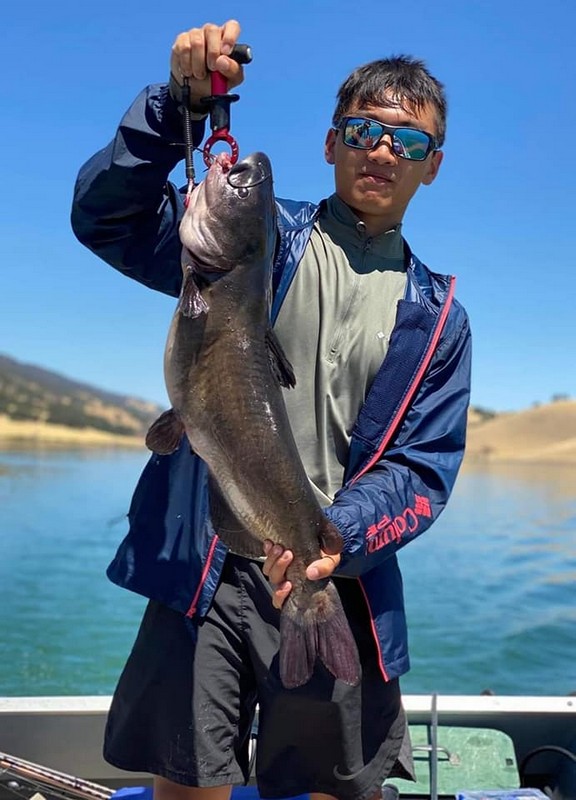 Ward caught the first fish, a 20-inch rainbow that was bright and shiny like a steelhead, on a Kastmaster lure. I then proceeded to catch my limit of rainbows to 20 inches while tossing out Kastmasters and soaking PowerBait.
Since then, the water district has raised the dam and expanded the lake once – and is now planning to conduct another dam raising project.
The proposed project will include a regional intertie (the Transfer-Bethany Pipeline), improved pump stations and pipelines and could increase the reservoir’s capacity up to 275,000 acre-feet.
The proposed project builds upon the first phase of expansion from 100,000 to 160,000 acre-feet funded by the Contra Costa Water District and completed in 2012.
“Los Vaqueros is one of the projects being evaluated in the context of a broader Bay Area effort to work collaboratively as a region to improve water supply reliability,” according to the Contra Costa Water District. “Expansion of Los Vaqueros Reservoir improves Bay Area water supply reliability and water quality while protecting Delta fisheries and providing additional Delta ecosystem benefits.”
Fishing has been “really good” for striped bass and catfish at Los Vaqueros since it reopened, reported Jeff Jackson at the Los Vaqueros Marina.
“Anglers are catching both species from shore near the pier by the marina while using anchovies and chicken liver. The keeper stripers being caught average 3 to 5 pounds each,” he revealed.
Anglers have successfully battled some huge channel catfish at the reservoir lately. Scott Bradley landed a 32-pound catfish while fishing PowerBait from a rental boat in Cowboy Cove two weeks ago. Alex Michaels also bagged a 30 lb. catfish on anchovies while fishing from a boat in Howden Cove. 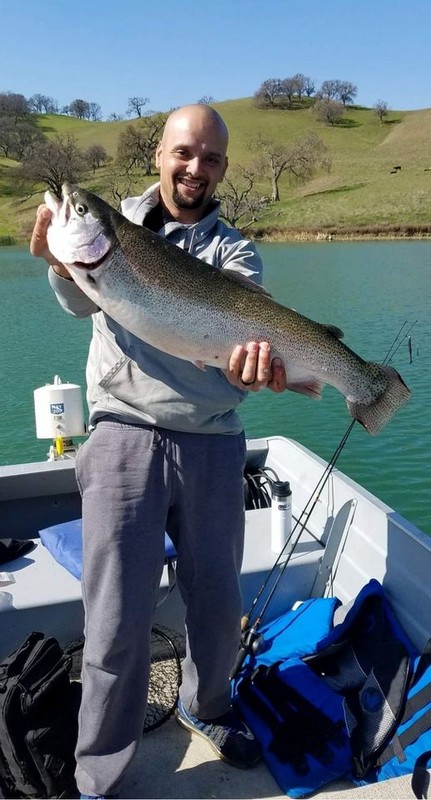 Another angler landed two 7-pound catfish and one 8-pounder on Saturday, October 3, while bait fishing on the lake.
Catfish plants have help bolstered catches at the reservoir this year. The lake management planted 1,000 pounds of catfish in the reservoir.
In contrast, trout fishing has been very slow lately. “We’re waiting for the water temperature to go down before we start planting trout again,” Jackson stated.
The lake is currently holding 140,000 acre feet of water and the surface water temperature is 72 degrees.
Since the lake was first opened to fishing in 2001, a number of huge fish have been by shore anglers and rental boaters fishing Los Vaqueros.
Fernando Gonzalez of San Lorenzo caught the lake rainbow trout record weighing 16.42 pounds on a gold Kastmaster in the South Cove on January 24, 2015. This is the only lake record set at the expanded reservoir.
Kastmasters seem to have a lock on Los Vaqueros fishing. A Kastmaster was used to catch the first fish ever landed at Los Vaqueros back in 2001, the 20 inch rainbow aught by Larry Ward.
King salmon were stocked only four times at Los Vaqueros. The CDFW planted salmon fingerlings at Los Vaqueros in 2004, 2005 , 2007 and 2009, but has planted them since.
Harry Stoner of Stockton broke a nearly three-year-old salmon record by .2 pounds with a 6.2 pound chinook caught on February 29, 2010. He was fishing in Sunken Oak Cove (now known as Cowboy Cove) with a Kastmaster. There were two other large salmon caught on the same day. 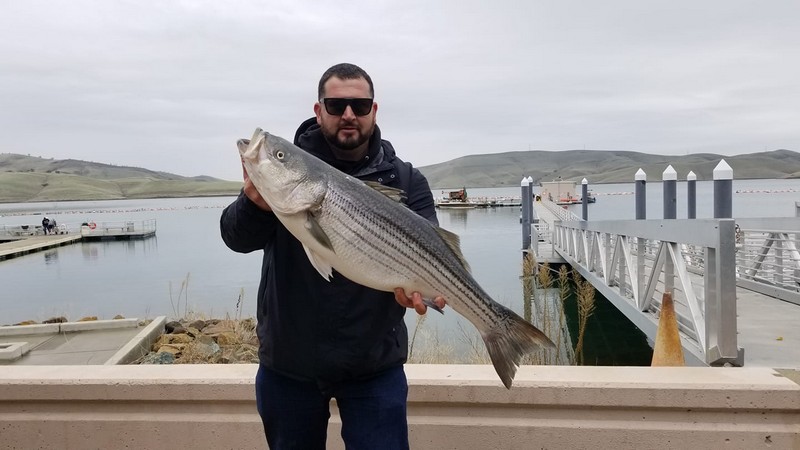 This salmon record is likely to stand unless the CDFW decides to stock the lake again with salmon fingerlings, since the fish don’t naturally reproduce at Los Vaqueros.
The oldest record at the reservoir was set on Thursday, May 29, 2008, when the late Todd Brusco of Danville smashed the old mark by more than two pounds. Brusco’s 12-pound catch was 2.21 pounds heavier than the old record set in 2007 by Eric Sabye.
Todd was fishing with his friend Johnny G. in a rental boat. He said the fish took his lure as soon as he cast it into the water. Todd and Johnny G. fished a few times a month at Los Vaqueros. They returned the record fish to the reservoir.
“It took what seemed like an eternity to get it in (probably 20 minutes) with a rather light pole and 8 pound test line,” Brusco said after he caught it. “John netted it on the first try as it finally got close enough to the boat.”
Brusco also became the first person ever to hold two simultaneous fishing records at LV when he caught a 45.2 pound striper on April 17, 2009 in the middle of the reservoir while trolling.
At the time, that was the largest fish caught at the reservoir by 16.53 pounds, and the largest striper ever caught by more than 20 pounds. Since then, there have been several stripers caught in the 30-pound range, according to the Los Vaqueros Marina.
Todd was trolling as he was coming back to the marina (after catching a limit of trout) in an electric rental boat when the monster bit on his Rapala lure. It took him 90 minutes to land the fish while fishing with 12-pound line.
Stripers have never been planted at Los Vaqueros, but come in through the water from the Contra Costa Canal.
Finally, seven-year-old Alec Michaels of Livermore broke the catfish record at Los Vaqueros with a 30.31 pound caught on August 22, 2011 while he was fishing anchovies south of boat docks during the expansion construction. It was the last record set at the original 100.000 acre-foot reservoir and was set shortly after construction began.
It was the second time the catfish record fell in 2011 and breaks the nearly two-month-old mark of 29.09 pounds held by Van Pham of San Leandro.
Alec and his father were fishing from shore, south of the boat docks, with an anchovy when they reeled in the monster.
Alec is the also youngest person to hold a fishing record at Los Vaqueros. They continue to be regular anglers at the reservoir, according to the marina.
Los Vaqueros, the largest reserovir in the San Francisco Bay Area, is located in the northern Diablo Range, in Contra Costa County. The lake is 524′ feet in elevation when full. The reservoir is 2.485 miles in length and 2.48 miles in width, with a mean depth of 170 feet. The existing reservoir holds 160,000 acre feet of water when full.
For more information, call Los Vaqueros Marina at 925-371-2628. 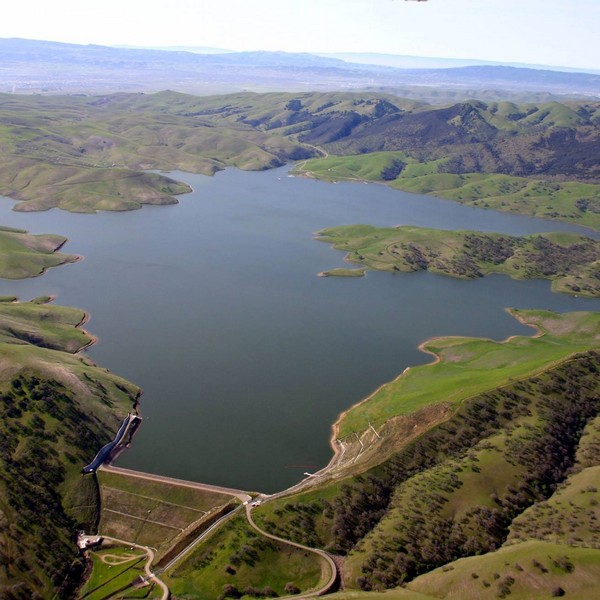 The watershed is open as of Saturday, September 26. The lake management been cleaning up after the recent wildfires, and ensuring a safe space for visitors. They appreciate everyone’s understanding and cooperation during this unprecedented time at the watershed. More Information: www.ccwater.com/losvaqueros
Watershed Updates
· Burn Area Closed: Even with clean up and remediation, there is an area on the South side that remains closed due to fire damage. Signs are visible around the burn area to remind visitors not to enter the area for your safety.
· Partial Gravel Road: Along Los Vaqueros Road near the South side entrance, there is a partial gravel road due to recent construction.

Safety Rules and Guidelines at Los Vaqueros
For your safety and ours during COVID-19 Pandemic
Help us keep Los Vaqueros safe by cooperating with the statewide social distancing requirements and watershed rules. Please do the following to protect yourselves, other watershed visitors, and watershed staff during COVID-19 pandemic.
Before heading to Los Vaqueros
· Bring cloth face covering / mask as recommended by the CDC.
· Bring water and hand sanitizer. Drinking fountains will not be available. Bottled water will be available for sale at the Marina.
· Download a Watershed Map (PDF) before leaving home. Or, at the entry kiosk, request a brochure with a map so you can familiarize yourself with the area.
While at Los Vaqueros
· Keep a 6-foot distance from other watershed visitors while shore fishing, hiking, biking, or horseback riding (or with only immediate household members.) Please note: Biking and horseback riding are permitted on the north side of the watershed ONLY.
· Wear cloth face covering / mask when within 6 feet of other watershed visitors. Please keep in mind that any interaction with staff requires a mask to be worn.
· Boat rentals became available of July 1 Boats are first come, first serve. Boat rentals are weather dependent. Strong winds prevent us from allowing any boats on the water, so be sure to call the Marina at 925-371-2628 to check wind conditions at LV before heading out to the watershed. Masks will be required for boat renters while on gangway and dock, and 6-foot social distancing and masks while in line. Any interaction with staff requires a mask to be worn. See details and cost information for boat rentals.
· Parking only in designated (paved and gravel) areas. Citations will be issued for vehicles parked outside of designated areas.
· NO gatherings, picnics, or BBQs.
· NO fishing pier access.
· Marina building will serve customers at back door. Cash and credit payments are accepted.
· Restrooms are all single use.
· Watershed Office is closed.
· Interpretive Center is closed.
· Be aware of high-touch points such as benches, restrooms, etc. Use gloves or hand sanitizer.
· Pack it in. Pack it out. Do not leave trash on trails or near the shore.