El Cerrito – George, the owner of Bay Tackle, reports that rubber lip perch are in spawn mode in the SF Bay.  Fishing has been really good from Richmond all the way to the Golden Gate Bridge.  The bait of choice is Berkley Gulp 2” Sandworm.   The most effective method on presenting this bait is either on a high/low or Carolina rig setup with a size 4 hook.

Sturgeon fishing is slow in the bay right now.  There have been a few fish caught on ghost shrimp, herring and even salmon roe.

There is also consistent action on schoolie sized stripers.  Most anglers are throwing lures for them with white and white/chartreuse swimbaits being the most productive. – Ernie Marlan

When boat-based rockfish and lingcod seasons open off the Northern and Central California Coast on April 1, anglers will see new fishing regulations that reflect this abundance, including being able to fish deeper water than they have been able to fish over the past two decades.

“The good news for 2021 is groundfish populations are rebounding,” said CDFW Senior Environmental Scientist Caroline McKnight. “Of the eight stocks that were declared overfished in the early 2000s, all but one, yelloweye rockfish, has been declared rebuilt today.”

A new scientific paper published in Nature Sustainability, “Identifying Management Actions that Promote Sustainable Fisheries,” confirms McKnights’ assessment. The study was led by Michael Melnychuk, research scientist at the School of Aquatic and Fishery Sciences at the University of Washington.

“Rebuilding these stocks required collaboration between a lot of different people, from fishermen to scientists to environmentalists,” said Pacific Fishery Management Council (PFMC) Chair Marc Gorelnik. “It was a tough process, but in rebuilding these stocks, we also built long-lasting valuable relationships.”

Nine of ten West Coast groundfish stocks have successfully rebuilt since the stocks were declared overfished or depleted in 1999. Most recently, the stock of cowcod south of 40°10’ N lat. was declared rebuilt in 2019, decades ahead of the expected date.

The 2021 regulation changes include:

• The Rockfish Conservation Area (RCA) boundary will increase to 30 fathoms (180 feet) in the Mendocino Management Area during the regular open season (May 1-October 31).

• The RCA boundary will increase to 50 fathoms (300 feet) in the San Francisco Management Area during the open season (April 1-December 31).

• The RCA boundary will increase to 100 fathoms (600 feet) in the Southern Management Area during the open season (March 1-December 31).

• The ‘All Depth’ fishery in the Northern and Mendocino Management Areas will continue each November and December unless modified by an in-season action.

The new regulations were adopted by the California Fish and Game Commission in mid-October and the PFMC in July. Information: (831) 649-2801. 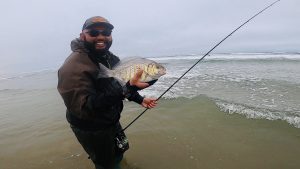