Truth be told, I’m starting to become a fixture on Captain “Rustic” Rob Reimers’ boat.  And who can blame me?  I get to fish with an experienced captain and his adorable co-captain, a three-legged rescue chihuahua named Warren, all while kicking back on a comfortable River Wild boat that is largely covered, keeping me out of the elements.

Rob invited me to go sturgeon fishing, so of course, I jumped at the chance.  But when he mentioned it would be a night trip, I was a little hesitant.  As someone deeply allergic to mosquito and spider bites, I was apprehensive at the thought of waking up the next morning covered in welts.  However, I decided I would just cover myself from head to toe because landing a sturgeon would be well worth it!

After work one day I raced up to the ramp at Colusa State Park, brand new sturgeon tag in hand.  Rob, Warren, and I left the dock around 4:30 pm and arrived at our spot in a matter of minutes.  Unlike my trolling trips with Rob at Lake Oroville and Bullards Bar, we would stay put in one spot for the duration of the afternoon and evening.

I’d been sturgeon fishing only one time before, in the California Delta.  This was my first time targeting them on the Sacramento River, and to say the landscape was a little different would be an understatement.  Looking around the considerably smaller area we would be fishing in, not to mention a far more shallow depth, I wondered how successful we’d be.

Captain Rob had never failed me before, so I settled in while he explained the different baits we would be using (eel, ghost shrimp, and nightcrawlers), watched how he tied his leaders and paid attention to what I should do once we got a bite.  It was a lot of good information that helped pass the time as the sun dipped behind the trees, indicating that prime sturgeon time was upon us.

Then the waiting began.  We sat facing the back of the boat, both sets of eyes darting back and forth between three rods, looking for rod tips to break their normal bouncing patterns to tell us there was a fish on.

I’ve lost count of how many times I’ve gotten a bite while fiddling around with my GoPro, so I wasn’t surprised when I saw Rob jump up and grab the middle rod as I struggled to put my camera back together.  He quickly handed it off to me so he could reel in the other rods to avoid everything becoming a tangled mess.

“Hang on!” he screamed, as I hung my body over the side, trying to keep the line off of the boat and myself out of the water below.

The fish started peeling drag and the only thing I could do at that point was to plant my feet and keep my balance.  It quickly and intently headed for a specific spot upriver – unfortunately, that spot was a snag.

We maneuvered the boat around to get a better vantage point, but by the time we got in position, the fish had broken us off.

I was disappointed, but what can you do?  Rob re-rigged the rod with eel and we settled in again, staring intently at the rod tips for any tell-tale signs.

It wasn’t long until we saw the first rod being taken down hard – twice!  I grabbed it and started reeling as quickly as I could before this fish, too, could head for that same snag.

This one felt slightly smaller, but took me for one heck of a ride, zigzagging from north to south over and over again.  Just when I thought I had it under control and somewhat near the boat, it would take off and make me work even harder.  That’s the thrill of sturgeon fishing!

Several minutes in, it decided to change its course.  Now running east to west, my main objective was to keep the line clear of the motor.  With some assistance from Rob, we safely maneuvered it to the port side of the boat where the rest of my fight would occur.

Out of breath, but determined to land this thing, I made slow but steady progress, hoping this fish would tire out before I did. When it finally surfaced, we couldn’t have been happier.

“There it is!  There it is!” I squealed, half giggling and half trembling with adrenaline.  We netted it as quickly as we could and brought the beast on board.

Rob’s measuring tape confirmed its length was 55 inches, well within the legal 40- to 60-inch keeper size.  However, after snapping some quick video and admiring its beauty, I decided to release it for another angler to battle someday.

I filled out my sturgeon tag and we arrived back at the ramp by 10pm.  I headed home with a big smile on my face, hoping I’d get the chance to do it all again soon.

For an in-depth tutorial on how Rob assembles his leaders and rigs up his baits, watch the video on my YouTube channel, Stacy Goes Outside. 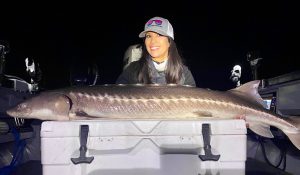