Striped bass spend a lot of their time in the ocean and are very aggressive when attacking their bait. So when anglers use a relatively light fishing rod and reel the fight can be amazing.  You never know if you are going to catch that 3-5lb or that 20-40lb fish.  Anglers find stripers great table fare but most would agree that the smaller fish are better to eat than the larger ones.

Anglers have several options on what technique to use when targeting striped bass.  They often use a variety of baits while sitting on anchor or fishing from shore.  Pluggers cast a variety of lures while others troll for them.

I have had the opportunity to troll for stripers with a lot of friends as well as fishing guides in the California region.  In my opinion, the best trollers are the ones that troll their baits into specific spots or zones.  They are using the current, tule islands, and other structures to their advantage.  They locate depth contours in the river to identify paths the stripers are traveling.  They identify schools of bait and what depths the bait is in.

I believe great striper pluggers and great shallow water striper trollers have many differences but they do have a lot in common.  Pluggers make a cast into a specific spot or zone because they “think like a fish” and when they make a cast they believe that a fish is there for a reason.  A few of those reasons include ambush spots, current and back eddy’s.  Shallow trollers often use their boat to troll their lure into similar areas as well.  Let’s use the West Bank on the California Delta as an example.  Pluggers and shallow water trollers are able to get their lures into similar locations like near the tules and up tight to other structures in the shallow water.  Most importantly, they are able to get their lures where the shallow water meets the deep.

Remember, stripers love to ambush bait and will sit against tule islands and use the current to their advantage.  Usually, waiting for baitfish coming down the current line right to them.

I believe that when the stripers are deep they are most likely not feeding.  I think this is important to know because it changes your approach on how to catch them.  A real example for me is when I pull up to a spot and plan to fish shallow there are times I notice my electronics have identified a huge school of stripers below me in deep water.  They are actually on the edge of where the shallow water meets the deep.  I believe there are a few possibilities on why the stripers are there.  One, they are resting.  Two, they are moving along the deep water.  The third reason, the exception to my thought, is that there is a school of bait and they are feeding on it.

Trollers should mark on their electronics where this school is located and grab a lure that will dive to this depth.  Make a mental note of what depth the fish are in and try trolling in this zone and definitely back and forth over the top of this school.

Try and figure out why the stripers are there.  Is it bait? Is there a big depth change?  A hole?  There is a reason so try and figure it out.  Another thing to try and figure out in this situation is whether the stipers are in a tight group or if there are just a bunch of them in a general area. If they are tightly grouped you should troll over them, turn around and do it again.  If they are scattered you should troll a larger area before turning around.   Make sure to take note of the depth the fish are located in.  It could be a pattern.

In this same situation, those who enjoy jigging or spooning for stripers would naturally grab a BladeRunner Spoon and drop it down.  Stripers cannot handle a dying bait fish falling right in front of their face and that is exactly what the spoon looks like.

I like to believe a group of stripers that are deep are resting.  They are not interested in eating at that moment.  However, if I am sitting on the couch after I just ate a large meal and my kids bring over my favorite dessert, I rarely turn it down.  Stripers are the same way.  If you troll their favorite meal right in front of their face even if they are full their instincts are just to eat it and rarely will pass it up.

The other time I think deep diving lures are effective is in the Spring.  I believe a striper in the delta in the spring is moving upriver and has one thing on their mind, to spawn.  The spring striper feeds, of course, but its main purpose is to spawn and I believe they are constantly on the move.  Trolling the deep water can be effective during this time.

The fall striper on the other hand is in the delta for one reason, to feed.  They are not inclined to move around as much and they will be most likely hanging out with the shad schools.

Because spring stripers are headed up river to go spawn I believe that they use the deep water to travel.  I think they are following deep water contours and have a specific path.  Therefore, I do not think trolling blindly in deep water is effective.  In my opinion, it seems to be more productive trolling deep water and you need to find their path.  Usually, it’s something different in the deep water.  Current, shallower water (in the deep water), deeper water, or even bait.  Use your electronics to identify a pattern.  I would suggest immediately marking the spots where you caught a fish and maybe after you land a few the spots may tell you a story.

The action of your lure is most important and you can tell if it is working correctly by the action of your rod tip.  Educate yourself on the action of the lure at various speeds.  It is easy to do.  Leave the lure close to the boat so you can see the action while going various speeds.  Some days stripers like their baits moving fast and sometimes they like it moving slower.  I will say that on most days they like it at a variety of speeds.  Troll fast, slow down for a split second, go fast again.  Other times, hold your rod, move it up and down, this creates a different action on the lure and often triggers a strike.  The message here is to change it up.  In my opinion, traveling the same speed allows your lure to look like a lure.  Changes in your speed makes a lure look like a bait fish and creates a reaction from stripers.

I believe when there is bait around and the stripers are feeding the faster troll is better.  Here is why.  The bait fish are being attacked by a school of stripers.  They are not taking their time trying to get away.  They are moving fast and erratic trying to get away.  If your bait is moving slowly it stands out and looks like a lure.  If your bait is moving fast and erratic it is more than likely going to fit in with the bait and probably get hammered.

Think like a striper.  They are predators!  They like to ambush bait.  Understand their habits, why they are in the river at certain times of the year. There is so much more to write about but I hope this gives you something to ponder.  Stripers are moving into the system daily.  Get out there and enjoy catching these amazing fish.  Don’t forget to release the larger ones and let them spawn.  Keep the smaller ones and enjoy fish tacos! 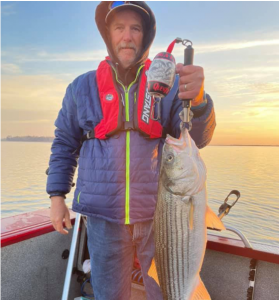