For many years, I have heard about the fishing exploits of Jeff Soo Hoo, so much so that when I first contacted him, I felt that I had known him for years. Soo Hoo, now Captain Jeff, owns and operates Soo Hoo Sportfishing.
A long-time angler, Captain Jeff has spent a lifetime learning the complexities of the California Delta and the local ocean waters. In the summer he is a second wheel for Emeryville Sportfishing, running salmon and rock fish trips aboard the Pacific Pearl and the Tigerfish. During the Spring and Fall he runs his namesake Soo Hoo Sportfishing, specializing in small party light tackle striped bass fishing in the California Delta. If you’ve never caught stripers on light tackle, you are missing out. So, when Captain Jeff told me the spoon bite was wide open, it didn’t take much persuasion for my fishing buddy Ian Rigler to join me on a trip to the Delta.
We met Captain Jeff at his slip located at Lauritzen Yacht Harbor in Antioch. There we met up with another old friend, Tony Andreini. After exchanging morning greetings we jumped aboard Captain Jeff’s spacious 23’ Rogue Jet Boatworks Coastal and made our departure. 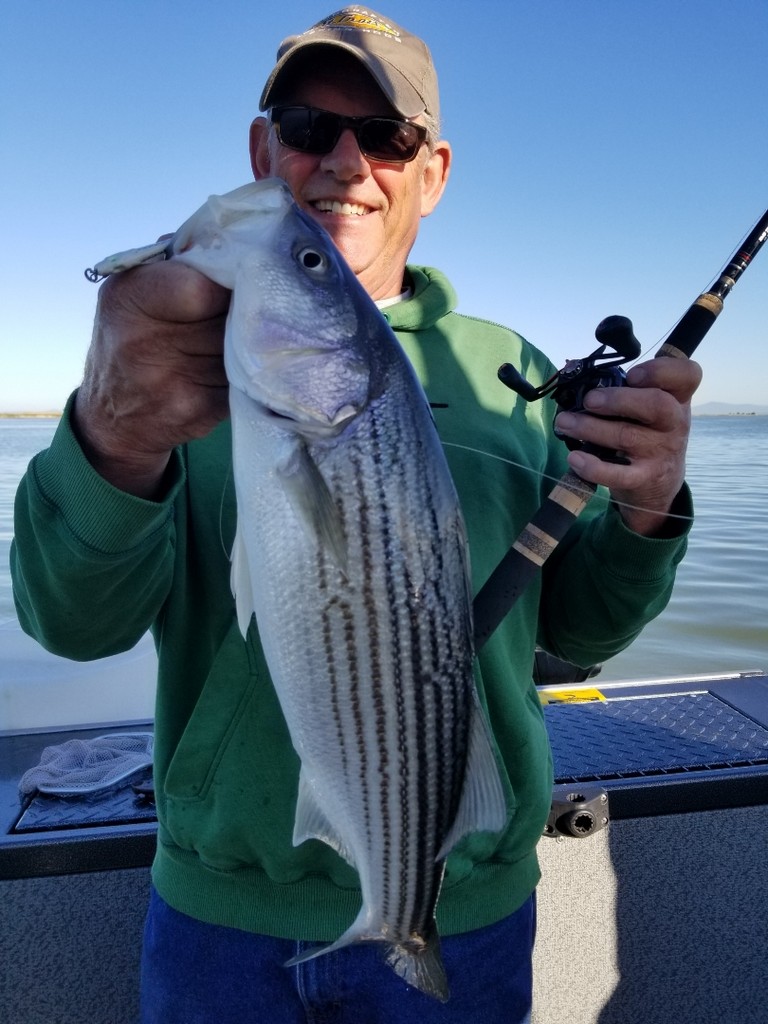 When we arrived at our first stop of the day, Captain Jeff methodically used his Garmin electronics to meter the area. Upon finding what he was looking for, he gauged the wind and current and set up the drift. I could tell by how he set the boat, that Captain Jeff had spent a lot of time running boats in the ocean.
“Let’s start off with the live bait,” said Captain Jeff as he handed each of us a rod rigged with a lively jumbo minnow on a traditional three way swivel rig. It did not take long before Ian hooked up, landed and released the first fish of the day, a scrappy 20” fish. We continued to drift and the bite remained steady. Little did I know, that things were about to change. 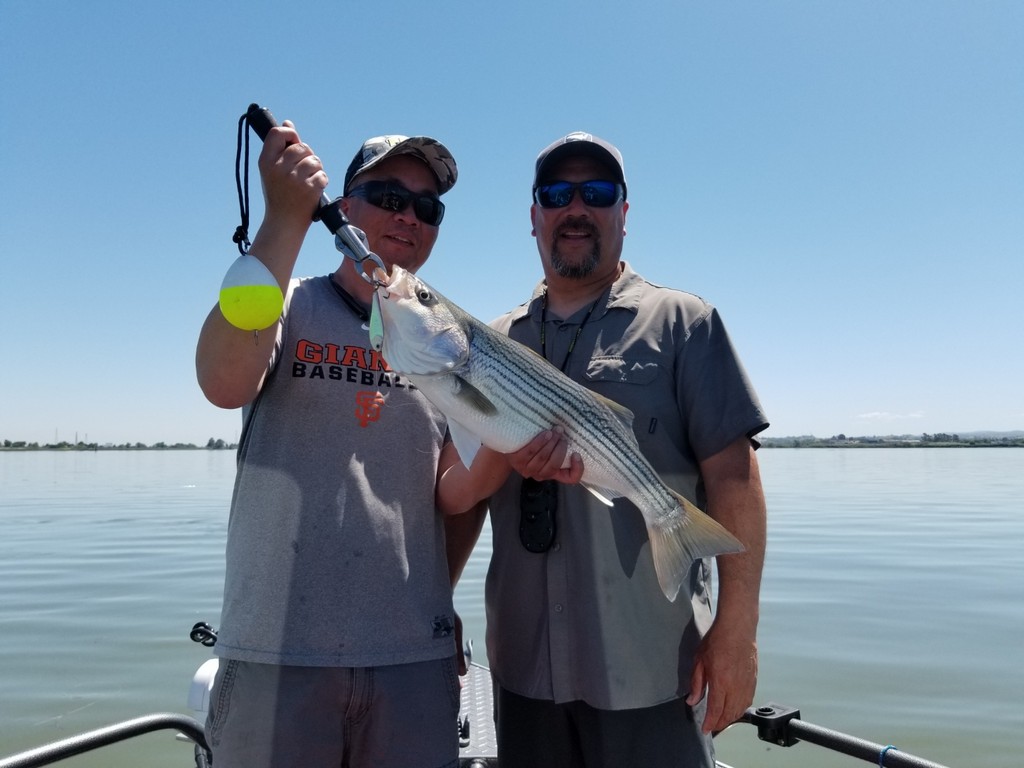 “Reel up the bait rods and get your spoons in the water,” shouted Captain Jeff. I looked over to the graph and it was lit up with ravaging stripers from top to bottom. I grabbed my trusty spoon rod and sent my 1 3/4oz Morning Dawn Blade Runner down to the school. My spoon did not even have time to hit the bottom and I was hooked up. Almost instantaneously Tony was into a good fish as well and then it was Ian’s turn. After a spirited fight, I had a schoolie striper in the boat. This was the type of spoon action that I was looking for
For the remainder of the tide the action was frenetic. In short order, we had caught and released over 50 fish. Captain Jeff challenged us to hit triple digits and once he did that, it was game on. Each time the action slowed or we lost contact with the school, Captain Jeff would relocate them and the action would resume. Just shy of our goal, the tide stopped and so did the fish.
Captain Jeff made the decision to run to another area where the tide was running. When we arrived, it was apparent this was a popular location as there were many boats in the vicinity. After several drifts and just a few bites, Captain Jeff made a run to a new area, hoping to find a new school of fish. 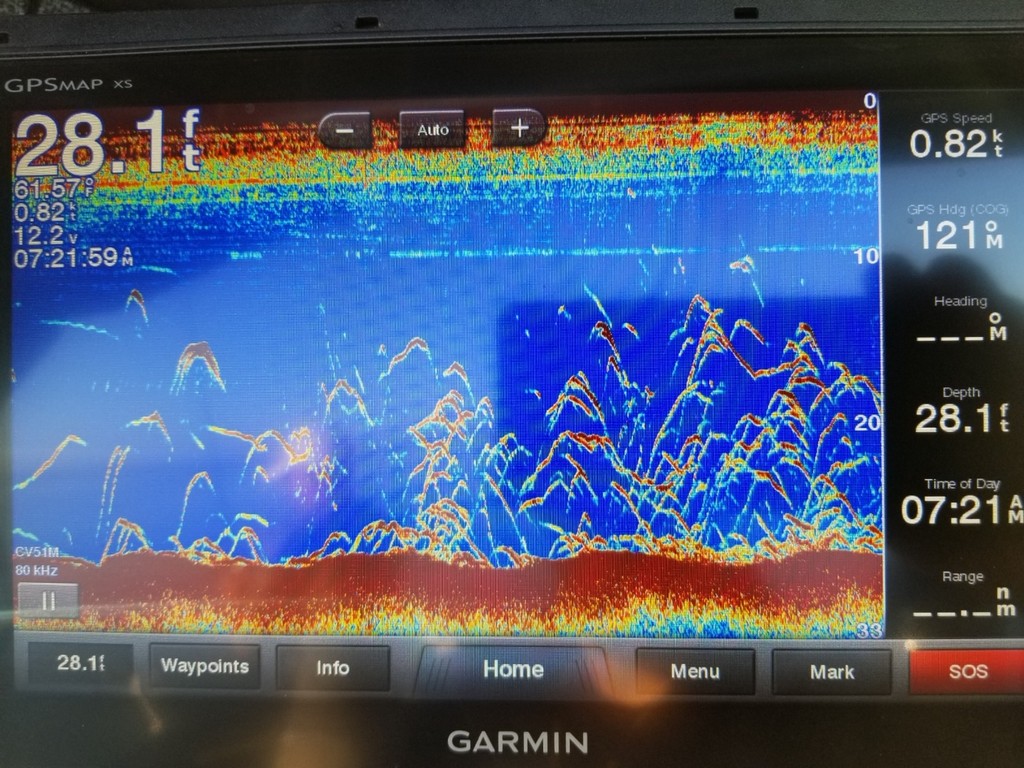 Again, we started out drifting live minnows, however the action was sporadic at best. Not satisfied with the way things were going Captain Jeff fired up the twin Mercury Outboards and began searching the area for signs of activity. “The tide should be getting right,” he said as he stopped on a small group of fish he marked on the electronics.
I dropped my spoon and on the second pump it was fish on. The fish made a strong run, pulling drag and using the current to its advantage. I knew this was the best fish of the day. I got the fish close to the boat and it surged away again. Light tackle fishing is so much fun and I was enjoying every moment of the fight. After a spirited battle, Captain Jeff slid the net under a beautiful 7lb bass that was released after a few photos.
Tony and Ian were enjoying the fast-paced action as well and soon Captain Jeff joined in on the fun. The afternoon just flew by and in short order it was time to call it a day. And what a day it was, we caught and released over 200 stripers, with half of them being over the 18” mark.
To book a trip with Soo Hoo Sportfishing, please call Captain Jeff at (925) 899-4045 or visit his website at www.soohoosportfishing.com. You can also follow Soo Hoo Sportfishing on Facebook or Instagram.