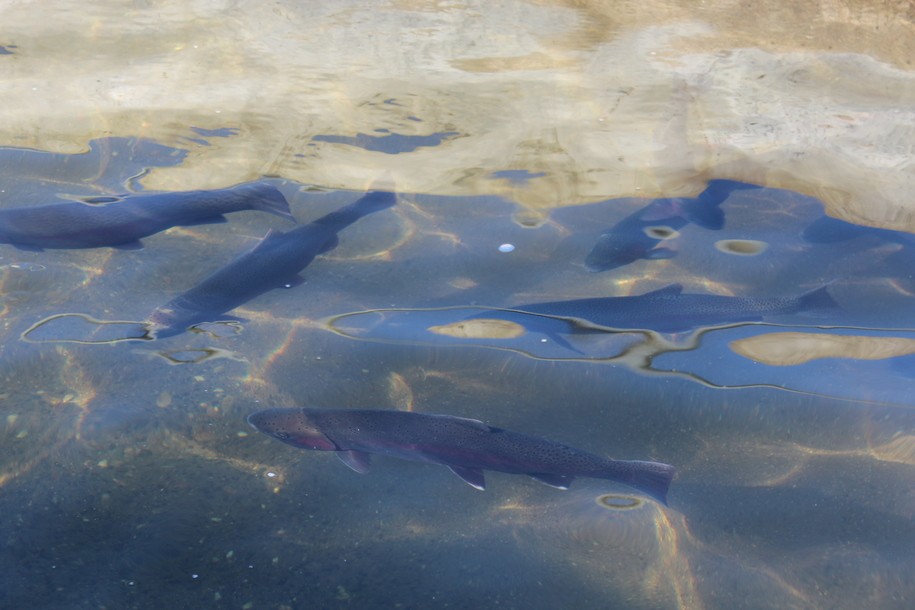 Hundreds of steelhead are showing at the Mokelumne River Fish Hatchery this season. Photo by DAN BACHER, Fish Sniffer Staff.

Large numbers of fall-run Chinook salmon have returned to the Mokelumne River in Clements this fall despite challenging salmon fishing on the Mokelumne and adjacent sloughs this season.

A total of over 12,658 salmon have gone over Woodbridge Dam in Lodi on the Mokelumne as of December 10, according to Will Smith, manager of the CDFW’s Mokelumne River Fish Hatchery.

“We’re seeing a good, above normal season, although anglers have reported slow fishing in the river,” Smith said. “We will probably see just over 13,000 fish this fall.”

The hatchery took 1.4 million eggs on the best day this year alone. The hatchery has taken 7.9 million eggs to date.  “We may take another 100,000 eggs next week, but we’re pretty much done,” said Smith.

Hatchery staff plan to raise and release 6.8 million smolts into the San Joaquin River and other sites in the spring of 2020.They will put 3.8 million of these in the San Joaquin and 3 million in the ocean for enhancement purposes.

These fish will be divided up between 160,000 salmon for Monterey and 160,000 for Santa Cruz in the Monterey Bay Salmon and Trout Project pens, 750,000 for the Coastside Fishing Club pen project in Pillar Point Harbor and 1.9 million at Fort Baker for direct release by the CDFW at night.

This fall of 2018 yielded excellent salmon fishing for anglers in the lower Mokelumne River and adjacent sloughs. However, fishing was much slower this year, with few people reporting catching fish in spite of the good numbers of fish in the river.

“Anglers would come up to the hatchery this year and be surprised why we had so many fish when the fishing was so poor,” said Smith. 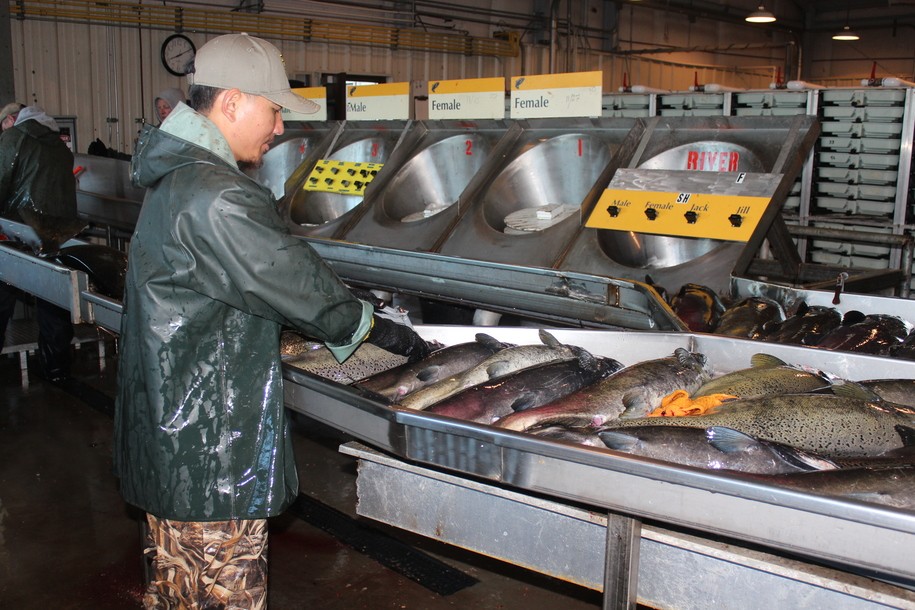 A total of over 12,658 salmon have gone over Woodbridge Dam in Lodi on the Mokelumne as of December 10. Here we see a CDFW staffer sorting salmon for spawning. Photo by DAN BACHER, Fish Sniffer Staff.

The steelhead runs have increased dramatically in recent decades also. The ponds at the hatchery were plugged with hundreds of steelhead, including some big ones, on the day of my visit.

A record number of adult steelhead, 719, returned to the hatchery in the winter of 2017. The facility has trapped 367 adults so far this season, according to Smith.

This is quite a turnaround for the river, since no steelhead came back to the hatchery, located on the river right below Camanche Dam, for 10 years from 1976 through 1986. Again in 1998-1999, no adult steelhead returned to the facility.

In those years, the river hosted a popular resident trout fishery for fly, bait and lure anglers, but relatively few of the 100,000 steelhead yearlings released every year went to saltwater and returned.

Before the listing of the Central Valley steelhead under the Endangered Species Act (ESA), the Mokelumne was managed as a catchable trout fishery, rather than as a wild steelhead or trout river. The CDFW regularly stocked the river with catchable size steelhead in the 10 to 15-inch range,

There are many factors behind the record salmon and steelhead runs in recent years on the Mokelumne. “Strong returns confirm the health of the Mokelumne River, making this a welcoming home where salmon can survive and thrive,” said Jose Setka, EBMUD Manager of Fisheries and Wildlife. “The strategies at work are proving successful and are leading to a robust population of salmon in this river.”

Setka said the record salmon returns are a result of efforts that have focused on fine-tuning water operations, including managing cold water in Camanche and Pardee reservoirs to maintain good spawning conditions, releasing pulse flows of 1,500 cfs from Camanche Dam to attract fish, restoring gravel habitat and using tagging data to evaluate hatchery release strategies. Additional measures include transporting juvenile salmon by barge and feeding them a specialized diet to assist the fish in transferring from freshwater to seawater.

Smith cited their studies on the best times to release fish as key factors in their success on salmon, including releasing salmon at the best times to take advantage of tides and limiting the number of consecutive releases to avoid predation. 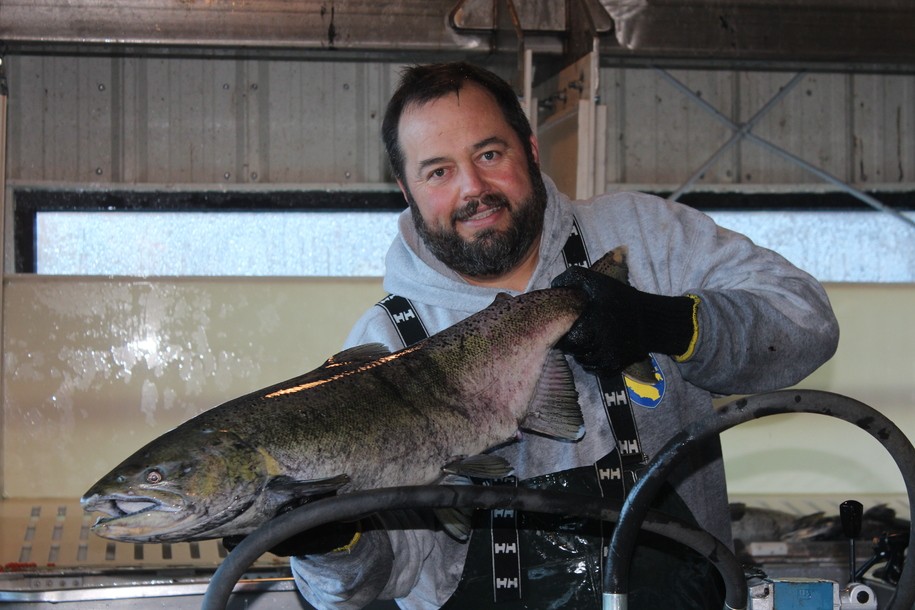 Will Smith, The CDFW’s Mokelumne River Fish Hatchery manager, brings in another salmon to be spawned. Photo by DAN BACHER, Fish Sniffer Staff.

Another major factor in their salmon management success is the partnership they have developed with the federal agencies, including the Bureau of Reclamation and the U.S. Fish and Wildlife Service to close the Delta Cross Channel Gates to prevent Mokelumne fish from straying into other Central Valley rivers.

Before 1998 when the Mokelumne River Settlement Agreement went into effect, the average run was 4,000 fish. Since then, the run has averaged 9,541 fish per year.

Setka said the ability to implement management actions that lead to positive outcomes in the Mokelumne River is due to engagement from a diverse group of stakeholders.

“The Mokelumne is one of the success stories in bringing back fisheries,“ said Bill Jennings, Executive Director of the California Sportfishing Protection Alliance (CSPA). “The current salmon and steelhead runs are the result of a long struggle in the state and federal courts and state regulatory agencies. EBMUD became a proactive partner in restoring the Mokelumne.”

“Salmon and steelhead on the Mokelumne are still dependent on the Delta, so that is problematic. If we compare the Mokelumne to fisheries on the San Joaquin and mainstem Sacramento, it can be categorized as a glowing success story. But we still have to get fish into the habitat above rim dams and we have to fix the Delta,” stated Jennings.

A study released in 2019 by Cramer Fish Sciences shows that 13.7 miles of Mokelumne River above Pardee show the potential to support both spawning and rearing of chinook salmon: https://fishsniffer.com/index.php/2019/03/18/study-shows-potential-for-restoring-mokelumne-salmon-to-their-historic-spawning-habitat/

Anglers are currently gearing up for the steelhead opener on the upper section of the Mokelumne below the hatchery. The season is from Jan.1 through Mar. 31 and again from the Fourth Saturday in May through July 15. The limit is one hatchery trout or one hatchery steelhead.

Then from July 16 through October 15, the limit in this section of river is two Chinook salmon and one hatchery trout or hatchery steelhead. 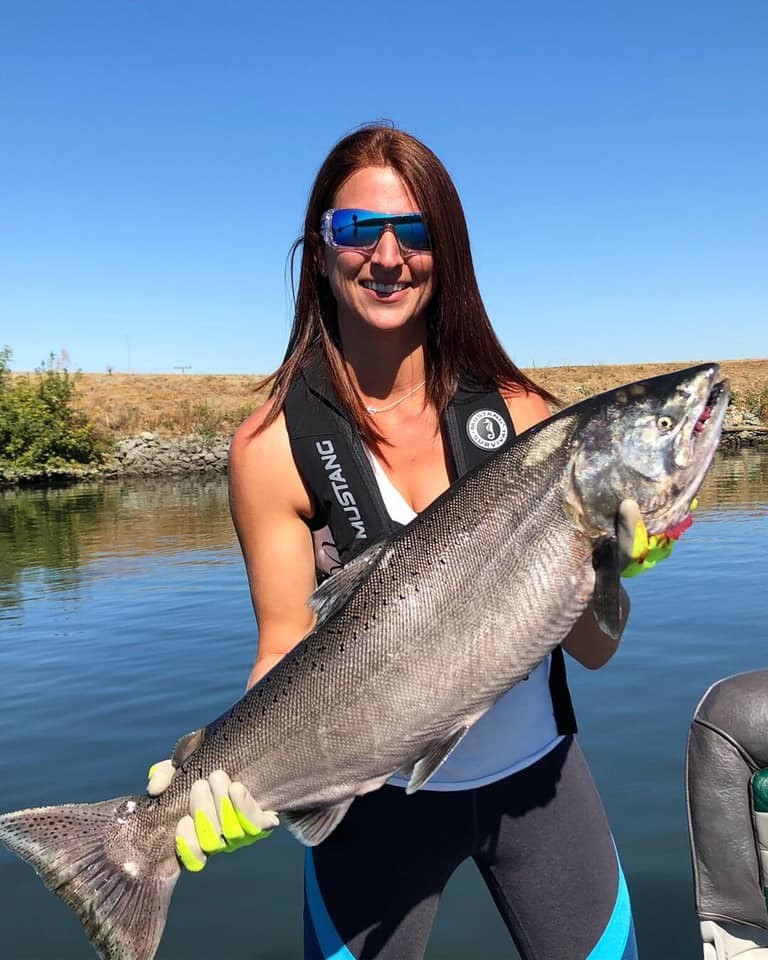 Kristin Lanzarone-Scribner of Sacramento landed this hefty Chinook while jigging with Eric Webb in the Mokelumne River in October of 2018. Salmon fishing was much slower this year than last year, but the hatchery staff has seen good numbers of Chinooks.  Photo by ERIC WEBB.

The Mokelumne River (San Joaquin Co,) is open from Camanche Dam to Elliot Road from Jan. 1 through Mar. 31 with a limit of 1 hatchery trout or 1 hatchery steelhead.

It reopens from Fourth Saturday in May through July 15 with a limit of 1 hatchery trout or 1 hatchery steelhead.

From  July 16 through Oct. 15, the limit is 1 hatchery trout or hatchery steelhead and 2 Chinook salmon.

From Elliott Road to the Woodbridge Irrigation District Dam including Lodi Lake, the season is from Jan. 1 through July 15 with a limit of 1 hatchery trout or 1 hatchery steelhead,

From July 16 through Dec. 31, the limit is 1 hatchery trout or hatchery steelhead and 2 Chinook salmon.

The section between the Woodbridge Irrigation District Dam and the Lower Sacramento Road bridge is closed to all fishing all year.

The Mokelumne River and its tributary sloughs downstream of the Lower Sacramento Road bridge and east of Highway 160 and north of Highway 12 from Jan. 1 through July 15 has a limit of1 hatchery trout or 1 hatchery steelhead.

From July 16 through Dec. 16, the limit is 1 hatchery trout or hatchery steelhead and 2 Chinook salmon.

From Dec. 17 through Dec. 31, the limit is 1 hatchery trout or 1 hatchery steelhead

Gate Closures – To prevent straying of Sacramento and Mokelumne River salmon, CDFW coordinated closures of the Delta Cross Channel Gates on weekdays and reopened for weekend recreation beginning in September.

Tagging Data – Using Coded Wire Tag data from returning fish, the agencies measured the effectiveness of releasing fish on outgoing tides and limiting releases to no more than two consecutive days from the same location to increase juvenile salmon survival.

Barging – The agencies have transported juvenile salmon from the Mokelumne River by barge and released them in the San Francisco Bay. Barging improves fish survival through the Delta and may also help with imprinting for juvenile salmon to re-trace their way to natal waters.

Transfer Diet – Juvenile salmon undergo an incredible physiological change when moving from freshwater to saltwater. To ease the initial stress, a specialized feed containing higher salt levels is fed to the juveniles in the weeks before the release.

Habitat Improvement – EBMUD and DFW have spent nearly two decades developing and implementing a plan to improve spawning and rearing habitat in the river below Camanche Dam.